I sometimes think we look at Christmas through rose-colored lenses of our own choosing: God sent His sweet Son to earth by way of a warm cozy manger, dazzled lowly shepherds with an angelic host, and led kings to bring gifts to the Baby Jesus. It’s a beautiful story that stirs our hearts each year and leads us to give gifts, too. And we love it.

But like most everything in life, the deeper meaning of what happens isn’t always in plain sight. In reality, there is a much nobler greatness behind the magical scenes of Christmas that involves our destiny. You see—you and I were born into a world-gone-wrong.

God had created a world He called “good,” that is until evil entered the picture and ruined everything. Then darkness reigned. God’s world would eventually destroy itself because evil left unchallenged would lead to death for everything, including us. It was no less than a tragedy in which you and I were left without hope. Here’s why.

History had opened with Adam and Eve falling for the guise of knowledge. It was a costly fall for them, and us. Wrong won. In time, man grew so evil that God regretted that He had made us at all, and He destroyed the world with water. Wrong won again. Throughout the centuries man became so wicked that “everyone did what was right in their own eyes.” Yet, what they declared to be right turned out to be all wrong. Then along came the Pharisees, making a mockery of the Holy Law and changing what was good into what was prideful and self-seeking. Wrong. Wrong. Wrong. Man couldn’t get it right—only wrong—hopelessly wrong.

What might a look at the Christmas story through nobler lenses reveal?

Mankind was locked in hopelessness—stuck on wrong.

Someone had to right the wrong.

Someone had to challenge evil.

Someone had to bring hope.

Someone had to come.

That glorious night we celebrate as Christmas is about many things—but none more necessary for us than a Babe lying in a manger bringing hope to a world-gone-wrong.

He came for us! But don’t miss the deeper meaning behind this statement. Claim it for yourself. Make it personal—declare it out loud: I was without hope in a world-gone-wrong, and He came for me. 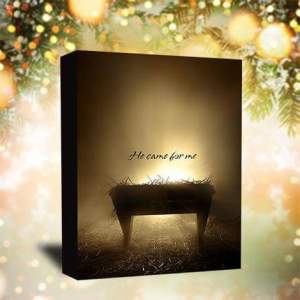 Dear Lord Jesus, as we look at the manger scene this Christmas, help us to see the deeper meaning of why you came to earth—you came for each of us. ~ Janie Kellogg

What do you think? Cancel reply