Have you ever thought about what God wants from you? I know I have. When we listen to various preachers, teachers, and authors, we’ll likely get a lot of different answers. They will vary from things like “dying to self” to “crawling up in God’s lap and calling Him Daddy.” The first one makes us squirm and the second makes us squirm, too. No one wants to die to self because it’s painful, and many of us don’t know God well enough to crawl up in His lap.

This morning I asked myself that question and the Holy Spirit dropped a rather simple answer into my heart. It is so simple that we only need to look at our earthly fathers to confirm it. Whether a heavenly Father or an earthly father, what they want is for their children to make good choices in life. Making good choices today will ultimately result in a life that glorifies either father, heavenly or earthly.

The Bible gives us a great story about making choices—the story of Mary and Martha in Luke 10:39-42. I suspect there’s not a woman alive that hasn’t heard that story—you know where Martha is killing herself in the hot kitchen and Mary is relaxing at the feet of Jesus. We mostly relate to Martha because we’ve been there and done that. But Jesus had strong words for Miss Martha. He said that Mary had chosen “what is better” and it would not be taken away from her.1

Let’s analyze their choices. Martha was concerned about much serving. Sounds like a good choice to me, especially if I’m having lunch at her house. But her little sister made a different choice to sit at the feet of the Savior and learn from Him. Surely much work ranks higher than just sitting, doesn’t it? Did Jesus really mean that spending time with Him is more important than serving others? But what about church work—wouldn’t it rank higher? Probably not even church work, or ministry, or missions. I seriously believe Jesus is telling us here that nothing trumps time with Him.

If that is the case, then we can determine that time in His presence outranks all other activities, bar none. But there is good reason behind Jesus’ position. You see, there are great benefits that come along with making the choice that Mary made and Jesus so adamantly defended. It’s like putting the oxygen mask on yourself before putting it on your child in an airplane emergency. You’ll be of little help in saving your child’s life, if you haven’t taken measures to save your own.

Jesus knows that if we will sit at His feet and drink in the spiritual refreshment that comes from being in His presence, we are then—and only then—equipped to go out there and love the world He sent us to reach. And that, my friend, is a life that will glorify our Father!

Think about it like this: With one simple daily decision to spend time with God, we can give Him what He wants most from us—to make good choices. While I am clearly aware that we can’t reduce pleasing God to one single choice, it is a place to start. In fact, we can bring a smile of approval to our Father’s face before this day is over. Go ahead, be a Mary and sit for a spell! ~ Janie Kellogg 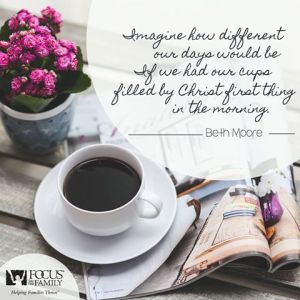 1Luke 10: 38-42 ~ As Jesus and his disciples were on their way, he came to a village where a woman named Martha opened her home to him. She had a sister called Mary, who sat at the Lord’s feet listening to what he said. But Martha was distracted by all the preparations that had to be made. She came to him and asked, “Lord, don’t you care that my sister has left me to do the work by myself? Tell her to help me!”

“Martha, Martha,” the Lord answered, “you are worried and upset about many things, but few things are needed—or indeed only one. Mary has chosen what is better, and it will not be taken away from her.”

6 thoughts on “What Does God Really Want From Us?”

What do you think? Cancel reply