I never know how or when the inspiration will come for my annual Christmas post—I just know it will. This year, it happened the day after Thanksgiving, when we took my stepson, Wade, to a movie. The choice was simple—animated, not too long, and a positive message. The newly-released Christmas movie Star was sure to fill the bill.

Entertaining, delightful, and yes, inspiring! As we got back into the car, we had many takeaways to share with one another. First, we loved the genuinely stubborn donkey named Bo. After chasing his own dreams, Bo decided to turn around and go back to help Mary, the one who had shown him kindness. In the end, by following God’s plan instead of his own, Bo found the desire of his heart—to carry a King on his back.

Second, there were those really-bad dogs that pursued Mary relentlessly because their wicked master wanted to kill her. Yet, when Bo bravely intervened and had them headed toward their death, he chose to show mercy instead. In reality, the really-bad dogs were themselves prisoners of the wicked one. Perhaps they were worth giving another chance. After receiving compassion from Bo, they too came and worshipped the Baby King.

Lastly, there was Mary’s faith—it never wavered as she remained oblivious to the threats that swarmed around her. Because Mary knew God had given her this assignment, she was confident that nothing could keep her baby boy from being born. She trusted the God who had decreed it so, His choices for Jesus’ make-shift nursery, and the weird menagerie that became the welcoming party.

So is Star simply a cute movie, or is there a message for us? I believe the later. Like Bo, we stubbornly chase our own dreams. But somewhere along the way, God’s kindness catches up with us and we make a turn around. It’s then that we realize following God’s plan is the only way to have the desire of our hearts. And aren’t we reminded by those really-bad dogs that our world is full of really-bad characters who are also being directed by the evil one? Is it possible that they can’t see how they are being used by the great enemy of all mankind? Perhaps, some mercy and compassion from us might turn them around. After all, haven’t we been given a second chance? And then there is Mary’s faith—oh how I need it, how we need it! In a world full of darkness, disorder, and danger, could we learn to be oblivious to the threats? Could we see our God-given assignment and then trust the One who has decreed it so, His choices for our lives, and even the weird people He places along our way? Perhaps we could, that is, if our faith wasn’t so small.

As Christmas approaches, I must ask, “Have you seen the Star yet?” Have you caught a glimpse of the deeper meaning behind that familiar story of Jesus’ birth and how it applies in the here and now? My prayer for all of us is that we will begin today to follow God’s plan, to show mercy and compassion as we go, and that our faith in God will grow BIG as we embrace the New Year.

Christmas blessings to all ~ Janie Kellogg 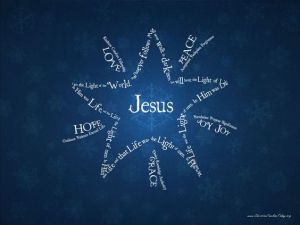